A versatile hunter and all-purpose gun dog, the German Shorthaired Pointer possesses keen scenting power and high intelligence. The breed is proficient with many different types of game and sport, including trailing, retrieving, and pointing pheasant, quail, grouse, waterfowl, raccoons, possum, and even deer. A medium-sized breed, he has an aristocratic bearing and can be solid liver or liver and white in color.

History of the Breed

The origin of the German Shorthaired Pointer is not clear, but the source of the breed seems to have been the German Bird Dog, related to the old Spanish Pointer, and various crossings with local German scent hounds and track and trail dogs. When the Germans introduced the English Pointers to lend elegance to the German Shorthaired Pointer prototype, the result was a utility dog that combined sporting virtue with clean lines, good looks and sound temperament.

Is this the Right Breed for You?

The German Shorthaired Pointer thrives as part of an active family. He is an even-tempered, intelligent and loyal family watchdog that has enthusiasm for its work. An athlete, he can adapt to his living situation, but requires consistent exercise. The GSP’s short coat sheds, but grooming is minimal.

German Shorthaired Pointer Did You Know?

The German Shorthaired Pointer is a versatile hunter, an all-purpose gun dog capable of high performance in field and water. The judgment of Shorthairs in the show ring reflects this basic characteristic. The overall picture which is created in the observer’s eye is that of an aristocratic, well balanced, symmetrical animal with conformation indicating power, endurance and agility and a look of intelligence and animation. The dog is neither unduly small nor conspicuously large. It gives the impression of medium size, but is like the proper hunter, "with a short back, but standing over plenty of ground." Symmetry and field quality are most essential. A dog in hard and lean field condition is not to be penalized; however, overly fat or poorly muscled dogs are to be penalized. A dog well balanced in all points is preferable to one with outstanding good qualities and defects. Grace of outline, clean-cut head, sloping shoulders, deep chest, powerful back, strong quarters, good bone composition, adequate muscle, well carried tail and taut coat produce a look of nobility and indicate a heritage of purposefully conducted breeding. Further evidence of this heritage is movement which is balanced, alertly coordinated and without wasted motion.

Size--height of dogs, measured at the withers, 23 to 25 inches. Height of bitches, measured at the withers, 21 to 23 inches. Deviations of one inch above or below the described heights are to be severely penalized. Weight of dogs 55 to 70 pounds. Weight of bitches 45 to 60 pounds. Proportion--measuring from the forechest to the rearmost projection of the rump and from the withers to the ground, the Shorthair is permissibly either square or slightly longer than he is tall. Substance--thin and fine bones are by no means desirable in a dog which must possess strength and be able to work over any type of terrain. The main importance is not laid so much on the size of bone, but rather on the bone being in proper proportion to the body. Bone structure too heavy or too light is a fault. Tall and leggy dogs, dogs which are ponderous because of excess substance, doggy bitches, and bitchy dogs are to be faulted.

The head is clean-cut, is neither too light nor too heavy, and is in proper proportion to the body. The eyes are of medium size, full of intelligence and expression, good-humored and yet radiating energy, neither protruding nor sunken. The eye is almond shaped, not circular. The preferred color is dark brown. Light yellow eyes are not desirable and are a fault. Closely set eyes are to be faulted. China or wall eyes are to be disqualified. The ears are broad and set fairly high, lie flat and never hang away from the head. Their placement is just above eye level. The ears when laid in front without being pulled, should extend to the corner of the mouth. In the case of heavier dogs, the ears are correspondingly longer. Ears too long or fleshy are to be faulted. The skull is reasonably broad, arched on the side and slightly round on top. Unlike the Pointer, the median line between the eyes at the forehead is not too deep and the occipital bone is not very conspicuous. The foreface rises gradually from nose to forehead. The rise is more strongly pronounced in the dog than in the bitch. The jaw is powerful and the muscles well developed. The line to the forehead rises gradually and never has a definite stop as that of the Pointer, but rather a stop-effect when viewed from the side, due to the position of the eyebrows. The muzzle is sufficiently long to enable the dog to seize game properly and be able to carry it for a long time. A pointed muzzle is not desirable. The depth is in the right proportion to the length, both in the muzzle and in the skull proper. The length of the muzzle should equal the length of skull. A dish-shaped muzzle is a fault. A definite Pointer stop is a serious fault. Too many wrinkles in the forehead is a fault. The nose is brown, the larger the better, and with nostrils well opened and broad. A spotted nose is not desirable. A flesh colored nose disqualifies. The chops fall away from the somewhat projecting nose. Lips are full and deep yet are never flewy. The teeth are strong and healthy. The molars intermesh properly. The bite is a true scissors bite. A perfect level bite is not desirable and must be penalized. Extreme overshot or undershot disqualifies.

The neck is of proper length to permit the jaws reaching game to be retrieved, sloping downwards on beautifully curving lines. The nape is rather muscular, becoming gradually larger toward the shoulders. Moderate throatiness is permitted. The skin is close and tight. The chest in general gives the impression of depth rather than breadth; for all that, it is in correct proportion to the other parts of the body. The chest reaches down to the elbows, the ribs forming the thorax show a rib spring and are not flat or slabsided; they are not perfectly round or barrel-shaped. The back ribs reach well down. The circumference of the thorax immediately behind the elbows is smaller than that of the thorax about a hand’s breadth behind elbows, so that the upper arm has room for movement. Tuck-up is apparent. The back is short, strong, and straight with a slight rise from the root of the tail to the withers. The loin is strong, is of moderate length, and is slightly arched. An excessively long, roached or swayed back must be penalized. The hips are broad with hip sockets wide apart and fall slightly toward the tail in a graceful curve. A steep croup is a fault. The tail is set high and firm, and must be docked, leaving approximately 40% of its length. The tail hangs down when the dog is quiet and is held horizontally when he is walking. The tail must never be curved over the back toward the head when the dog is moving. A tail curved or bent toward the head is to be severely penalized.

The shoulders are sloping, movable, and well covered with muscle. The shoulder blades lie flat and are well laid back nearing a 45 degree angle. The upper arm (the bones between the shoulder and elbow joint) is as long as possible, standing away somewhat from the trunk so that the straight and closely muscled legs, when viewed from the front, appear to be parallel. Elbows which stand away from the body or are too close result in toes turning inwards or outwards and must be faulted. Pasterns are strong, short and nearly vertical with a slight spring. Loose, short-bladed or straight shoulders must be faulted. Knuckling over is to be faulted. Dewclaws on the forelegs may be removed. The feet are compact, close-knit and round to spoon-shaped. The toes are sufficiently arched and heavily nailed. The pads are strong, hard and thick.

Thighs are strong and well muscled. Stifles are well bent. Hock joints are well angulated and strong with straight bone structure from hock to pad. Angulation of both stifle and hock joint is such as to achieve the optimal balance of drive and traction. Hocks turn neither in nor out. Cowhocked legs are a serious fault.

The hair is short and thick and feels tough to the hand; it is somewhat longer on the underside of the tail and the back edges of the haunches. The hair is softer, thinner and shorter on the ears and the head. Any dog with long hair in the body coat is to be severely penalized.

The coat may be of solid liver or a combination of liver and white such as liver and white ticked, liver patched and white ticked, or liver roan. A dog with any area of black, red, orange, lemon or tan, or a dog solid white will be disqualified. Another misconception about the Breed standard is how can a black GSP be registered if the color is listed as a disqualification. It is because the AKC has an open registration for the GSP breed and if an applicant meets the AKC registration requirement the dog can be registered.

A smooth lithe gait is essential. It is to be noted that as gait increases from the walk to a faster speed, the legs converge beneath the body. The tendency to single track is desirable. The forelegs reach well ahead as if to pull in the ground without giving the appearance of a hackney gait. The hindquarters drive the back legs smoothly and with great power.

The Shorthair is friendly, intelligent, and willing to please. The first impression is that of a keen enthusiasm for work without indication of nervous or flightly character.

China or wall eyes.
Flesh colored nose.
Extreme overshot or undershot.
A dog with any area of black, red, orange, lemon, or tan, or a dog solid white. 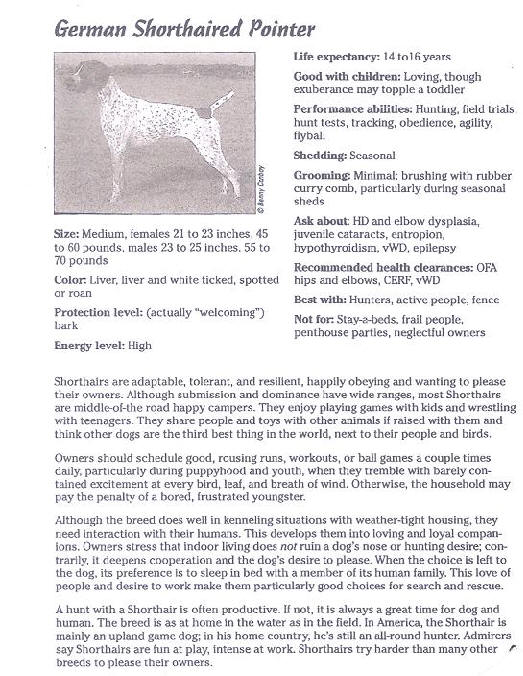 A Dogs Plea
Click here to read or print

We are taking deposits at this time.The first deposits will receive the first picks.A $200 deposit will hold your pick in the litter.The deposits are non refundable, so be sure you want a puppy.Prices are $800 for females or males.Give us a call if you are interested.218 631 2289.